It was 2 pm. Tom had spent the last eight hours wrangling drivers, equipment and contracts. Now he was looking forward to that first bite of smoked ham and cheddar with double mustard. He’d just picked up the sandwich when the phone rang.

He sighed, wiped mustard from his fingers and answered. “Tom’s Transport. Tom speaking.”

“Hi, Tom, this is Carl. You were asking when we could return those two trailers you rented.”

“Do we need them for another job?” asked Tom.

“Because I can’t find them,” said Carl.

It happens. Even under the watch of the most experienced fleet managers, trailers go missing from time to time.

When a trailer’s hooked to a tractor, your in-cab telematics can tell you its location. But when a trailer’s unhooked and has no telematics of its own, it’s vulnerable to “unauthorized interchange.” And when that happens, it costs.

A. They lose them in their system.

They rent for a good reason, expecting to pay $25 a day for three days. Three months later they owe almost $1,300 because that rental trailer got lost at their biggest customer’s DC.

When they do find it to turn it in, they may be faced with a bill for damage because that trailer’s been banged around for a few months.

So, we have to ask…why would you rent a trailer you can’t track? What’s the cost of a rental you can’t see?

Some carriers say, “We just don’t lose that many trailers.”? Fair enough. But what does it cost to lose just ONE?

Let’s do a quick calculation: 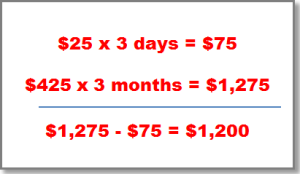 You planned to rent a trailer for only three days, but you ended up keeping it for three months because it got lost in your system.

If you subtract the amount you expected to pay from the amount you ended up owing, it looks like returning just one trailer after three days instead of three months could have saved you $1,200.

And that’s for only one trailer.

The #1 way to return rented trailers fast? Use trailer tracking.

Why pay for a rental trailer that’s just sitting empty in your customer’s back 40? Or that’s being used for storage?

Or, worst of all, that’s headed to the coast because it was loaded and hooked to another company’s tractor by mistake? All the while, you’re racking up rental cost.

Trailer tracking is the #1 way to see what’s going on with your rental when it’s unhooked, so you can return it fast.

The next time you need to rent trailers, why not follow these steps?

Insisting on trailer tracking with your rentals is your choice, of course. But what have you got to lose if it’s free?