Cargo Theft: 9 Ways to Combat It

The risk of cargo theft never goes away. Neither does our resolve to fight it.

A few years ago, a team of brazen thieves in south Florida made off with $340,000 in merchandise from a national retailer. They also took the semi-trailer that was transporting the goods.

The crooks made it all the way from Fort Myers to Miami before police caught up with them. An emergency ping to the trailer’s GPS device located it, and authorities arrived as the thieves were unloading their haul of clothes and jewelry. Police arrested eight people and charged them with grand theft cargo.

Trailer tracking technology is sophisticated enough to detect not only the location of the equipment but also when a trailer door is open. A tracking system has a “memory” and can trace the physical location of a trailer from point A to point B and all the waypoints in between.

In the case of the stolen goods in Florida, trailer tracking prevented that valuable inventory from vanishing. The technology has become an essential tool to combat cargo theft. Incidents like this aren’t uncommon, so shippers and carriers are forced to stay vigilant.

The Cargo Theft Problem is BIG 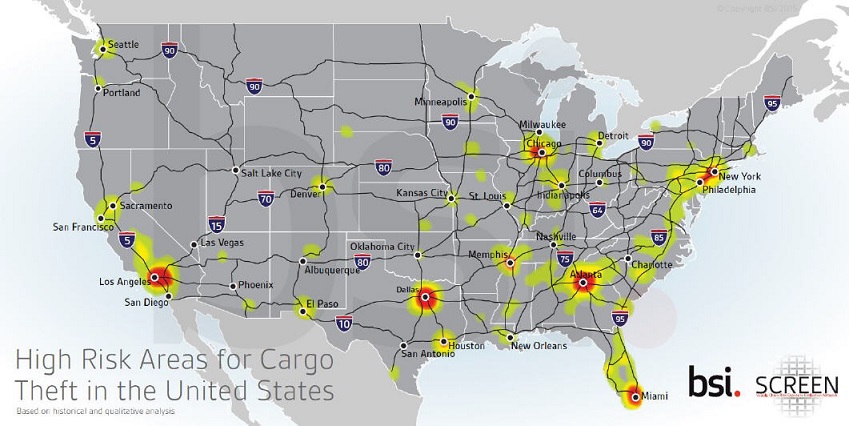 How big is the problem? BSI Supply Chain Solutions, a global supply chain risk management organization, estimated the loss from cargo theft in 2015 was more than $22 billion worldwide.

Here are the numbers for North America in 2015:

Cargo Theft in the U.S. 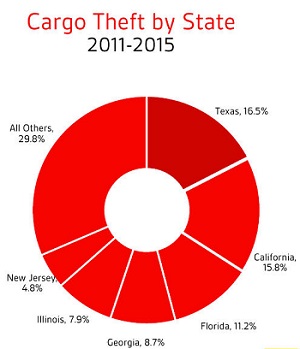 Thieves messed with Texas the most in 2015, helping themselves to consumer goods, industrial products and metal, mostly from the Dallas area. One cunning trick cargo thieves use proved particularly successful in California: the fictitious pickup. Around Chicago, thieves channeled Butch Cassidy—the Windy City was the site of more thefts from freight trains than any other area. In Florida, those may not be marlin fishermen you see on the sea—Miami is the primary port from which stolen cargo is smuggled out of the U.S., usually by sophisticated cargo theft gangs.

South of the border, cargo thefts grew a whopping 300% between 2008 and 2014. They were also more violent. And, even more disturbing, cargo theft in Mexico can be traced in part to growing collusion between police and thieves.

In the U.S., thieves tend to be choosy about their targets, BSI reports, going most often for food and beverage cargo, construction materials and electronics.

There’s good news, too, in that report on cargo theft.

BSI found that countermeasures significantly reduce the risk of theft.

They give the example of a pharmaceutical company that shipped $16 billion worth of product in the U.S. The company had invested about $825,000 on security countermeasures—that amounted to $20,000 for every $1 billion of product (an expense of only .005% of the cargo’s value). The countermeasures included active monitoring, team drivers, driver credential checklists, and passive radio frequency ID.

The result: the company’s loss forecast fell to about $350,000. Had they NOT implemented those countermeasures, they forecast their potential loss to be nearly $6 million annually!

What Can You Do to Prevent Cargo Theft?

What are some easy steps shippers and carriers can take to prevent cargo theft?

To start, evaluate your risk of theft . Do your routes include high-risk roads and highways? Are your pick-up or drop-off points in high-risk cities? Those are red flags.

Second, use discipline in how you apply safety tactics like these:

You may also want to conduct regular assessments to make sure your theft mitigation tactics are working. Then, if you find areas of vulnerability, you can take corrective action as soon as possible. According to BSI, it’s definitely worth the investment.

Here are some links to more information: